Without question many of the men purchasing these diplomas were frauds and charlatans eager to cash in on the vulnerability and suffering of unsuspecting patients. These were the early days of medical regulation but already medical boards had the holders of these diploma mill degrees in their sights.

…and yet, there was another group impacted by the rise of medical regulation, a group whose situation deserved genuine consideration. These individuals were neither charlatans nor quacks. The advent of state-based medical regulation and the requirement for a medical license posed a challenge to many practicing physicians. It meant a transition from the long preceding period of American medicine featuring informal or ‘on acceptance’ criteria for those who would practice medicine to a new era characterized by formal requirements (e.g., a medical degree) established under the auspices of a state medical board.

Several generations of physicians in post-Civil War America had been practicing medicine for many years with varying degrees of success in the eyes of their patients and communities. They often possessed no formal medical degree. Their education may have been a full or partial course of lectures from what modestly passed as a medical college. More likely, it may have involved self-study and working for a period of time with a practicing physician—a kind of a mentor/teacher relationship that may even have been sufficiently formalized as to call it a preceptorship. While there were certainly many outright frauds and charlatans who purchased one of Buchanan’s medical degrees, there were likely just as many purchasers—if not many more—who fell into this category. These were individuals with a genuine interest in medicine, who had been practicing for many years but with no formal credential to their name…individuals who saw the acquisition of a diploma as a formality incumbent upon them under the new era of state regulation of medicine.

This transitional era when a profession such as medicine or dentistry moved inexorably toward a formal, state regulatory environment saw its share of casualties in the process. One of the most memorable reflections of this comes from the American writer, Frank Norris, in his 1894 novel, McTeague.

Norris traced the moral and financial disintegration of a San Francisco dentist and his wife (Mac and Trina McTeague) who failed to navigate the transition from the pre-professional era of uncredentialed practitioners to the professional, state regulatory environment in which a degree (medical or dental) was the expected norm.[1]  McTeague’s undoing comes in the guise of a non-descript letter from the city of San Francisco carrying a notice from the state of California informing him that, lacking a degree from a dental college, he was no longer entitled to work as a dentist. A befuddled McTeague hands the letter to his wife who, in reading it through, slowly begins to understand her husband’s now precarious situation.

“I don’ know,” answered her husband.

“You can’t practice any longer,” continued Trina,— “is herewith prohibited and enjoined from further continuing—“

“I got it this morning,” murmured the dentist. “It just now came. I was making some fillings…”

“Say Mac,” interrupted Trina, looking up from the notice, “didn’t you ever go to a dental college?”

“How did you learn to be a dentist? Did you go to a college?”

“I went along with a fellow who came to the mine once. My mother sent me. We used to go from one camp to another. I sharpened his excavators for him, and put up his notices in the towns—stuck them up in the post offices and on the doors of the Odd Fellows’ halls. He had a wagon.”

“But didn’t you never go to a college?”

“Huh? College? No, I never went; learned from the fellow…”

“But do you know you can’t practice unless you’re graduated from a college? You haven’t the right to call yourself, doctor.”

“That you can’t practice, or call yourself doctor, unless you’ve got a diploma.”

This life altering scene concludes with a ring at his office door. McTeague rises to get up to treat his scheduled patient only to have his wife grab him with a sudden sense of panic. The letter from City Hall has left her fearful of the implications should her husband disregard the letter and continue to practice. “But you can’t. Mac, don’t you see? They’ll arrest you. You’ll go to prison. You can’t work…We’re ruined.”

While McTeague is a work of fiction, Frank Norris embedded his story in the realistic landscape of a late 19th century American city (San Francisco) as it edged itself into world of professional regulation. Norris wasn’t actually interested in this transition period per se or the workings of an emerging regulatory system. Instead, this transition serves his dramatic purposes for setting in motion the chain of events sending Mac and Trina into downward financial and moral spiral.

…and yet, even with the grandfather clauses that attempted to accommodate so many legitimate practitioners, I can’t help wondering: How many real-life McTeagues were created in the transition to a professional regulatory model?

The views expressed are those of the author and not the FSMB.

[1] Norris’ McTeague served as the basis for one of the silent era’s greatest films: Erich von Stroheim’s Greed (1924). Still shot below 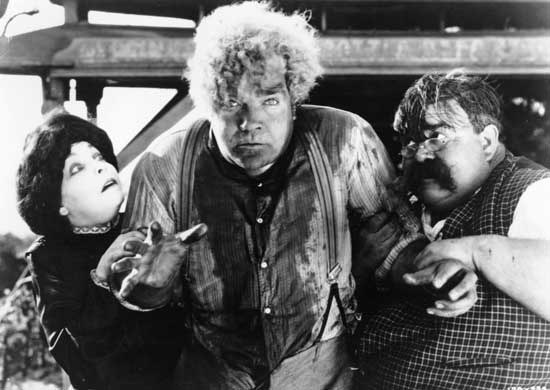