When state medical boards were being established throughout the United States in the last quarter of the 19th century, one of their primary statutory functions called for examining prospective candidates prior to issuing a license. This made sense as perhaps the greatest distinguishing feature of America’s medical schools at that time was their wide variation in quality and rigor.

As the medical license became the exclusive gateway to the legal practice of medicine, the stakes surrounding each state’s licensing exam grew higher. Some physicians were unwilling to accept the challenge to demonstrate their knowledge. Others—likely a small number—resorted to subterfuge, i.e., using proxy or substitute or ringer to take the exam for them.  Case in point – “Dr.” Phillip Dyment.

Dyment’s factual record seemed straightforward. He graduated from the Homeopathic Medical College of Missouri. In 1914, the Georgia Board of Medical Examiners issued him a license after passing their requisite exam. The following year, 1915, Dyment obtained a license in California (below) through a reciprocity certificate issued based upon his Georgia exam and license.

For reasons that are not entirely clear, staff working in the AMA’s Biographical Department took a closer look at Dyment’s record trail in 1919. Several items jumped out at them.

(1) Dyment graduated from medical school in 1891 but did not secure a medical license until his 1914 in Georgia. So what had he been doing all those years prior? Not practicing as a physician apparently. In a 1909 advertising flyer prepared by Dyment, he described himself as practicing “Mechano-Therapy.” Nowhere in the flyer did he claim an M.D. (see below right) 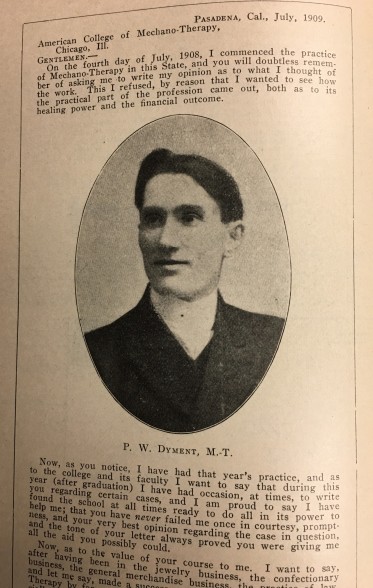 (2) The Homeopathic College from which he claimed to have graduated had a suspect history. In a 1918 publication, the AMA listed the school as a fraudulent” institution—a classification applied to institutions that operated outside even the relatively loose parameters for diploma issuance in the late 19th century.

(3) Inquiries through two of the school’s registrars and one of its trustees suggested that Dyment never attended, much less graduated, from the school.

(4) The only person associated with the school who substantiated Dyment’s claim to being a graduate was a former dean of the school, Dr. L. C. McElwee. As early as 1908, however, McElwee had been implicated in issuing a certificate to an unsuccessful applicant for licensure in Illinois, Dr. G. B. B. Larkeque.

So how did Phillip Dyment transition from mechano-therapist (i.e., chiropractor) to physician? With a little help from his friends, of course.

Investigation by the Georgia board revealed that Dyment (via Larkeque) secured the services of Dr. Lucius G. Wright to sit the examination for Dyment at the board’s offices in Atlanta, Georgia in the fall of 1914. McElwee’s substantiation of Dyment’s claim of an M.D. likely reflected his role in brokering the aid of Larkeque and Wright –both of whom traveled to Atlanta for the exam.

Wright received $150 for his efforts in taking (and passing) the exam on Dyment’s behalf. Larkeque’s role apparently involved doctoring photographs and signatures involved with the licensing application in Georgia. The key evidence in the case came from a deposition secured by Wright’s [disgruntled?] wife. (see below)

It is impossible to know whether the Dyment case was an extreme outlier or just one example of a practice more prevalent that one might have imagined. Certainly, medical boards feared exam proxies and worked to establish elaborate protocols designed to forestall such tactics.

The minutes from a meeting of the North Carolina medical board in 1889 captured one of its “rules” pertaining to exam administration. These included a signed written oath by the applicant that he had “neither given nor received” exam information; and that he had not “used any unfair means” to pass the exam. In the aftermath of the Dyment case, California board secretary, Dr. Charles Pinkham, wrote extensively on “safeguards” to the medical examination and licensing systems.

As for Dyment?  In 1920, the California and Georgia medical boards revoked the licenses issued to him. End of story, right? Not quite.

I’ll share the rest of the Dyment story next time. I think I’ll call title it: “Episode 2: The Imposter Strikes Back.”

The opinions expressed are those of the author and not the FSMB.

Charles Pinkham, “Safeguards Against Impositions in State Board Examinations,” Federation Bulletin 7, no. 8 (August 1921): 178-81.